An online resource for students and teachers

Objective: Students will analyze characters and characterization in order to develop and understanding of Catherine’s struggle to distinguish between textual and social convention so that she may form meaningful relationships.
Assessment:
– Formative: Work produced from close reading groups.
– Summative: Social media projects in which students translate characters and their existence within social conventions into 21st-century social media.

STANDARDS
Common Core State Standards
Content Area: English Language Arts
Standard: CCSS.ELA-Literacy.RL.11-12.3 Analyze the impact of the author’s choices regarding how to develop and relate elements of a story or drama (e.g., where a story is set, how the action is ordered, how the characters are introduced and developed).
Rationale: One of the key themes of Austen’s novels are community, and exploring how one is to interact with others in order to fit into the community and follow social convention. To explore this theme in Northanger Abbey, students should carefully track character development and description in order to construct an idea of what social conventions existed in Georgian England, and what Austen herself thinks of those conventions.
Teaching and Learning Sequence

During the course of reading the novel, students should study the characters of Northanger Abbey and their development. Students should seek to understand how the characters of Austen’s novel work in relation to each other and the larger community. This will open room for discussion on social conventions, and allow for students to translate 18th-century character motives and actions to 21st-century ones.

The idea of keeping character logs, which was introduced in Lesson 3, is a tool that can be used for students to begin to analyze characters, character types, and the role of characters in the work as a whole. As the novel progresses and Catherine spends more time with the Thorpes and Tilneys, students should begin to analyze each character, their motives, and what they teach us about the social conventions during this time. Chapters VI through XV provide many examples for students to examine.

An idea for encouraging students to use their close reading skills to analyze characters is to utilize the following strategy first as a class, then in small groups: 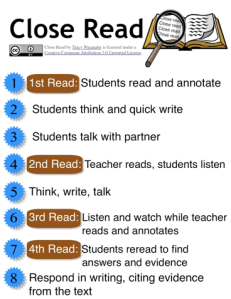 The teacher may demonstrate this strategy using Chapter VI of the novel, then have students use the strategy in small groups for subsequent chapters. Each small group may appoint a designated reader to take the place of the teacher in Step 4, and each group may be responsible for focusing on sections that involve one particular character. For instance, one group may choose to focus on Isabella Thorpe’s character, while another may read closely to analyze Henry Tilney. Students may eliminate the “3rd Read” step in their own groups. For each of the writing steps, students should use the annotation software at The Text of Northanger Abbey.org to record their thoughts. This way, students may go back to chapters and see what other groups had to say about certain characters after completing the activity.

Students should also review protagonists and antagonists, as well as flat, round, dynamic, and static character types. Ask students how they would categorize each character they have read about in Northanger Abbey so far. Ask questions like:

Once students have gained an understanding of the complexities of characters and their interactions within the larger social conventions and community of the 18th-century/early 19th-century, students should then seek to relate those social conventions to their own. Social media is just one facet of 21st-century culture, but it is a large one. Our digitally native students know this better than anyone, and can create remarkable products with the technology that they utilize every day.

Here are a few ideas for projects that students can create in order to demonstrate their understanding of the social complexities of Austen’s novel, and apply those ideas to their own world:

Memes are ideas, styles, or actions which spread (often as mimicry) from person to person via the Internet. These memes often take the form of a set image with a formulaic text on the image. For example, a popular meme called “Hey Girl” features photos of Ryan Gosling saying things that every girl would love to hear from a significant other. 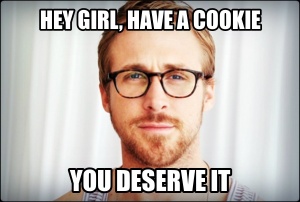 Students may create parodies of popular memes themselves in order to capture characterization. Here is an example of a Northanger Abbey themed “Hey Girl” meme: 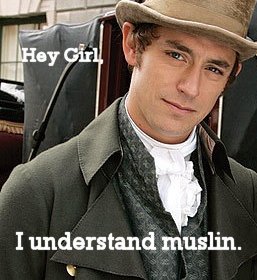 Students may create a collection of these memes in order to capture qualities of characters that appear within the text and translate those qualities into the 21st-century. Encourage students to make up their own memes, too. They do not have to be existing pop-culture references, as just the fundamental idea of creating a meme for a character already translates social conventions between centuries.

Students can create a series of fake Facebook statuses or pages in order to demonstrate character interaction within the text up to Chapter XX (Lesson 5 will delve into Chapters XX-XV). The website Simitator.com can be used to create Facebook statuses. Classtools.net has an editable template called Fakebook which students can use to create Facebook pages. Students should focus on creating facebook pages that take the characteristics of the Thorpes, Tilneys, and Morlands and translates them into today’s language. How would Catherine post about the new popular book she was reading? How would John Thorpe brag about his new vehicle?