An online resource for students and teachers

Grade Level: 11-12
Topic: Parody
Essential Questions: How does Austen’s use of satirical characterization, irony, and diction create a parodic work? How are parodies used to influence society’s view on a given topic?

STANDARDS
Common Core State Standards
Content Area: English Language Arts
Standard: CCSS.ELA-Literacy.RL.11-12.4 Determine the meaning of words and phrases as they are used in the text, including figurative and connotative meanings; analyze the impact of specific word choices on meaning and tone, including words with multiple meanings or language that is particularly fresh, engaging, or beautiful. (Include Shakespeare as well as other authors.)
Rationale: Students will analyze Jane Austen’s word choice and their impact on meaning and tone to understand how parody is developed and used in Northanger Abbey while making connections to parodies in the world around them. Students will understand how parodies are used to influence society’s view on a given topic.

Integration of Other Content Areas
– Visual/Performing Arts
Students will create an artistic representation of a parody to demonstrate their understanding.

Before beginning Northanger Abbey students should have a solid knowledge and understanding of parody. Below is a list of several resources that explain the difference between satire and parody:

Each of these resources provide current examples of parody and satire for students to relate to, and will help them frame their thinking for creating their own parody.

Students may look at definitions for each term, then write those definitions in their own words. Students should then examine current examples of parody and satire in order to solidify their understanding of the two, using the resources provided above. Students may use the Parody vs. Satire Graphic Organizer to record their definitions and to make notes as they look at the examples. 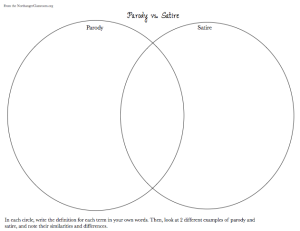 After examining the differences and similarities for the two terms, students may create a visual representation of their understanding of parody. Encourage students to create their own parody in the forms of political cartoons, movie posters, videos, songs, etc. This assignment may serve as scaffolding for a larger, cumulative assessment on parody for the unit.

After developing a firm understanding of parody, students may then apply their knowledge to the text of Northanger Abbey and begin to examine how Austen’s use of satirical characterization, irony, and diction create a parodic work.

The teacher may read aloud of first chapter of Northanger Abbey, discussing pardoic elements along the way. This will help students begin to  familiarize themselves with Austen’s prose, and the teacher may act as a guide for deciphering the text and noting how Austen creates a parodic work. The digital, interactive text may be found at The Text of Northanger Abbey.org.

Things to ask your students/discuss in Chapter I include: